Home » David Burr News » Local Interest » A brush with the past

A brush with the past

Bures artist Steven Binks talks about his love of machines, people and our social history. When did you first become interested in painting and art?

From an early age, I was always drawing in sketch books, school exercise books, scraps of paper, etc. At Bulmer Primary School, I won several prizes for my illustration work, one was the 1970 Sunday Mirror’s Children’s Art Exhibition, where my work was hung in the Royal Academy of Art in London.

My parents bought me a Rowney Watercolour Paint Box set, No. 64 at around that time, the price is still on the surviving cardboard box, showing 16’/ 6d. Although the paints have been changed to “artist’s” quality, I still use that box of paints to this very day. That one box of paints has earned me many thousands of pounds.

How do you produce your paintings?

I take photographs of the subjects I paint and always try to take them on a sunny day, the sunlight and shadows creating a more “3-D” look to the reference. I then use them to paint from. The photos are normally stuck together, maybe adding a different landscape background, maybe a dog, a gate, etc, to make a balanced composition. I then “scale-up” the image to paint from. The proportions of the image are normally a set size, so they can be used on greetings card, jigsaws, calendars, etc. Paintings can either be watercolour, acrylic or oil.

Why the attraction of old machinery?

Your images embrace our heritage/yesteryears. Are you helping people remember those golden days?

Probably “Golden Days” with rose tinted glasses! Working on farms in the days I generally portray was much more physically demanding and, dare I say it, dangerous!

Who is the artist that inspires you?

Simple answer – Terence Cuneo, an English painter famous for his scenes of railways, horses and military action. He was also the official artist for the coronation of Queen Elizabeth II in 1953. Above Photo: Three of a Kind

“I’d originally taken photos of Rogers Garage, Whiting Street, Bury St Edmunds, back in 2002, with the idea of producing a painting. One day, in 2010, while walking past, Pat Rogers, the owner, stopped me and said, “you’d better hurry up and do that painting, I’m closing next month!” This was my last chance at capturing on canvas, probably, the last old fashioned town centre garage in East Anglia. I took a gamble, stopping my everyday work to be able to paint the scene in real life. The gamble paid off. I sold the original to Pat, the image also ended up as fine art prints, greetings cards and a jigsaw.” 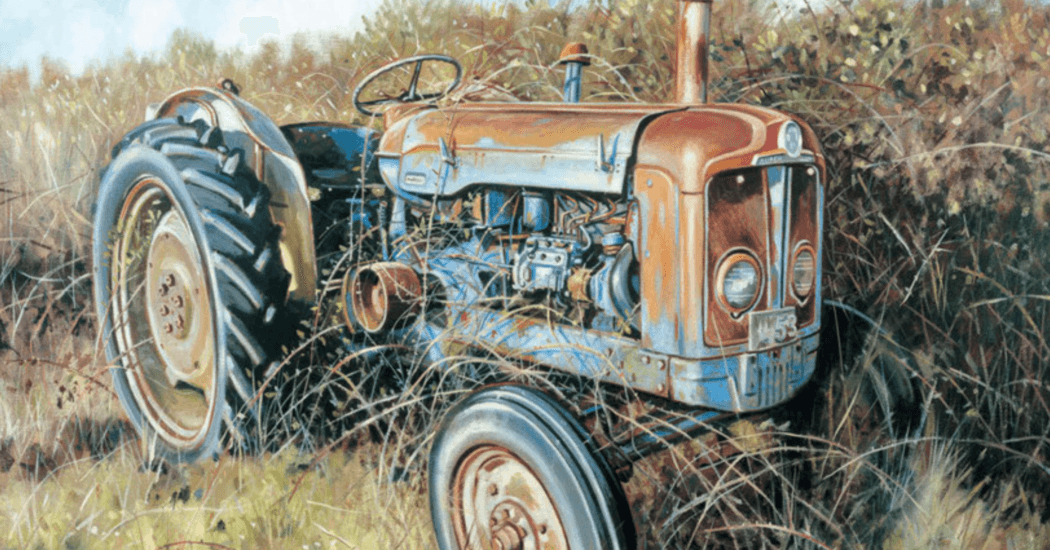 “A tractor collector from the Woodbridge area asked me If I could keep a look-out for one of the last “New Performace” Fordson’s to complete his Fordson Major collection. I knew of one I’d seen 20 years earlier. When I investigated, I found It was still on the farm, but now covered in brambles. Looking at the engine number, it also turned out to be one of the very last made at Dagenham in the final 3 days of production. I acted as the “go- between” in the purchase, I also sold the original oil painting to the new owner.” “In 2009, for the first time in it’s his- tory, Bures had a monthly live music event, in the form of a busking night. The venue was the Swan public house, sadly, now closed. One of several talented musicians to regularly perform was Matt Cardle, who later won “The X Factor” in 2010.


Featured image (at the top of the article)

As a result of winning “Visions of Sudbury” in 2011 with my painting of Sudbury Market Hill, I’ve had several painting enquiries. One was from a restaurant in Sudbury called “The Codfather”. Wishing to have large wall images of Sudbury’s past in their new extension, I came up with several ideas. During 1944 to 1945 the local population grew by an extra 3,000, due to the opening of the 486 Bomb Group air base near Sudbury. In my illustration, a battle damaged B17G, “Goin’ Jessie”, is flying over the town escorted by a Mustang P51 from nearby Wormingford air base.