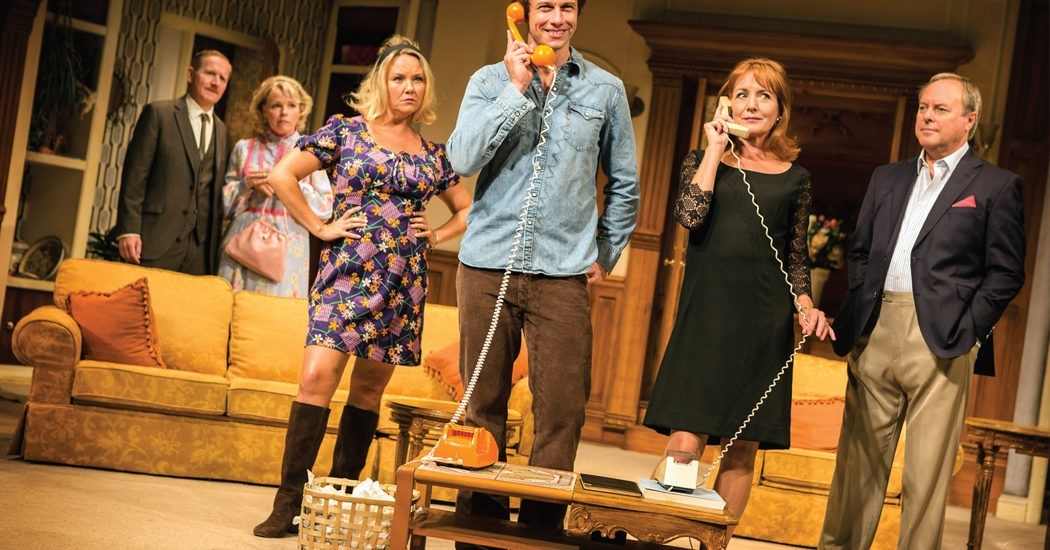 The face may be familar – Caroline Langrishe appeared in the locally filmed TV favourite Lovejoy – and now she has been back in the region in a comedy classic.

More about her time playing opposite Ian McShane’s loveable rogue later. This winter Caroline has been among the all- star cast of How the Other Half Loves, at Norwich’s Theatre Royal. Written by Alan Ayckbourn, it’s a story that follows three couples who find their social lives and love lives inextricably entwined.

Caroline Langrishe has been playing Fiona Foster “It is a fun role. She is a professional housewife . . . doesn’t work and runs the house immaculately, like clockwork, looking after her husband and his every whim. All his shirts are ironed and meals are on the table at the right time.”

Her character gets rather too friendly with Bob Philips, played by Leon Ockenden aka Coronation Street hunk Will Chatterton. The pair struggle to keep their canoodlings from their spouses played by The Royal’s Robert Daws and Charlie Brooks, of EastEnders, where she’s better known as nasty Janine Butcher. There is the added complication that a third couple are coming to dinner, played by Game On’s Matt Cottle and the comedy actress Sara Crowe, (who you may remember from the Philadelphia adverts), and the stage is set for an exquisite evening full of laughter.

Caroline says Ayckbourn has a knack for writing “domestic chat” that is unequalled. ”Just reading it is like being in my own house as he captures the absolute trivia of domesticity. He understands the human condition brilliantly and he writes with enormous wit and irony. And he knows about this particular type of suburban world very well. It’s very familiar.”

The mood of the piece took her back to the nuances of the sixties. She says. “It uses the words of that era. Needless to say I played the posh one – so, no surprises there – but I had lines like everything is ‘jolly’, ‘good’ or ‘super’ so it is very quaint in that way.”

Caroline has been working alongside a strong cast with at least one member she’s wasn’t unfamiliar with. “Funnily enough Robert Daws and I played husband and wife in an episode of Midsummer Murders which we made at the end of last year. It is weird to be married again within about eight months!”

It’s the second time Caroline has appeared in a comedy in the region this year, as she starred in the Feydeau farce Bang Bang at the Mercury Theatre, Colchester, adapted by John Cleese.

“It went down an absolute storm in Colchester. They loved it. Unfortunately John was having a hip operation in LA while we were rehearsing but we had some video link communication.”

Although an actor used to playing a multitude of roles in more serious drama from Minder, Casualty and Judge John Deed she’s particularly happy to be back in farce.

“I am still in the frantic frame of mind. I am perfectly used to quick changes, tearing around back stage and coming in through different doors. With farce it is all about timing. There are no thoughts of glasses of white wine, lying around in your dressing room and reading a newspaper until the evening is over. You need to be on high alert.”

She is no stranger to East Anglia and is probably most associated with her role as the auctioneer Charlotte Cavendish in the much-loved and much-missed BBC comedy-drama Lovejoy which was shot in West Suffolk and north Essex. “It was filmed from April to September. We were based in Long Melford at the Bull Hotel and it was just like joining a brilliant party that went on all summer. It was really good fun and the area utterly beautiful.”

Flashback even further and you may just remember she also starred in an episode of arguably Anglia TV’s best- known home-produced drama Tales Of The Unexpected. She appeared in Shatterproof where a husband discovers his young wife has commissioned an assassin to kill him. Caroline laughed: “That was an incredibly long time ago. Eli Wallach, the American actor, played my husband. I just couldn’t believe it. I hadn’t really been further north than Kent at that time. I have got to know Norfolk a lot better since as I have some great friends up here but there does need to be another television series based here, sharpish.”

Photo: The cast of How The Other Half Loves. From left, Matt Cottle, Sara Crowe, Charlie Brooks, Leon Ockenden, Caroline Langrishe and Robert Daws.