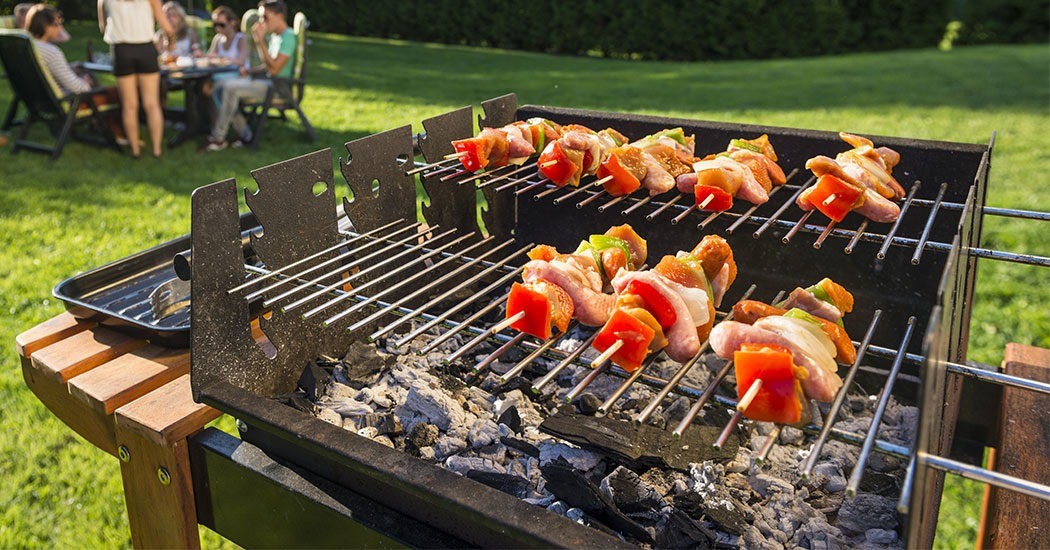 Among all the creatures on earth, only humans cook — and barbecue is the world’s oldest cooking method.

It has been said by anthropologists that mastery of fire permanently altered our evolutionary path, allowing us to have smaller jaws, smaller guts and the ability to stand erect

Barbecue was probably discovered by some proto-human tribe padding warily through the warm ashes of a forest fire following their noses to a particularly seductive scent. When they stumbled upon the charred carcass of a wild boar they squatted and poked their hands into its side. They sniffed their fragrant fingers, then licked the greasy digits. The magical blend of warm protein, molten fat and unctuous collagen in roasted meat is a narcotic elixir and it addicted them at first bite. They became focused, obsessed with tugging and scraping the bones clean, moaning and shaking their heads. The sensuous aromas made their nostrils smile and the fulsome flavours caused their mouths to weep. Before long mortals were making sacrifices and burnt offerings to their gods, certain the immortals would like to try their heavenly recipes.

Today we do it the same way our ancestors did. Our noses lead us to meat and vegetables roasted over live fire and we eat without forks or linen. Ribs are just pig on a stick, with grease and goop on our faces. “Don’t play with your food” doesn’t apply when you’re eating barbecue. If you don’t get it on your shirt you’re not doing it right. This is primal, elemental, sensual, ethereal, caveman eating. Pure carnal joy. Just like our ancestors.

Since the beginning of time, cooking with fire has always meant gathering the clan outdoors, and there is no more intimate assembly than hanging around the fire with the sweet smell of smoke and meat and onions in the air, a beer in hand, and loved ones at our table. As it was for our forbears, nowadays cooking for the clan and the burnt offering becomes a religious ritual. The main difference is that afterwards we email each other the recipes!

There may even be a psychological reason we love barbecue. Psychologists have shown that certain foods, among them barbecue, just plain make us happy. Who needs comfort food when we can have happy food?

Come on in, the backyard gate is open, roll up your sleeves, get fired up, strap on an apron and dig in!

If you have limited room or want to be more mobile then the Cadac Safari Chef Deluxe BBQ is the one for you.

A pretty simple design when compared to the all bells and whistles BBQ’s you can get now, but this BBQ is very versatile. You can use it as a BBQ grill of course, but also a stove and the lid doubles as a cooking hood and a wok for cooking up lots of different types of food.

The price of the Cadac Safari Chef Deluxe is also lower than other gas BBQ’s, coming in at under £80.

It is hard to look past the Fire Mountain 4-burner BBQ when you want quality and value for money. At less than £200 this really is a great BBQ.

There are 4 powerful gas burners made from cast-iron, a griddle, and a grill plate. The barbecue comes with a cooking lid/hood with a build in temperature gauge so you can ensure your food is cooking at the optimal temperature.

Gas BBQ’s can get very expensive, we’re talking about several thousand pounds. However, you can get a fantastic high-end BBQ for a lot less than this, and we recommend the Fire Mountain 5-Burner Barbecue that comes with a host of great features that lower priced BBQ’s do not have.

Perhaps the biggest advantage of this barbecue is the viewing window in the cooking hood. This allows you to check on the cooking of your food without opening the hood, thus maintaining the perfect cooking temperature. This means better cooking and also makes the barbeque more efficient since you are not constantly re-heating the grill.

There is of course the large 5-burner grill that is superior to most others out there.

People who own this BBQ say things like; “An exceptionally well made piece of kit” and “it is very strong and robust. Easy to take plates off to wash and assemble”.

At pushing £3,000 this is an expensive BBQ but if you can control it with a mobile App then it must be something special.

The Bob Grillson is a premium BBQ that cooks using wood pellets. You can use this high-end BBQ as a smoker, grill, and pizza oven. There is also a meat thermometer, NO, there are two independent meat thermometers so you can see just how well your food is cooked and even how rare things are. Want one steak rare and one medium, no problem with this barbecue.

As well as an amazing looking design this BBQ’s main selling point is the App control and monitoring. Push notifications right to your phone when you run low on wood pellets, active self-cleaning, updates on meat temperatures (via the food thermometers), cooking functions for perfect cooking and much more…

This is expensive but at the same time it is pretty amazing.

Costing quite a bit less than the Bob Grillson above, the Outdoorchef Venezia BBQ is still a high priced £900 unit. It is a quality gas BBQ though with two (2-burner) cooking areas, a temperature gauge integrated cooking hood, and a robust granite food preparation area.

The BBQ comes with a high temperature flash cooking grill that is perfect for finishing off meat or anything else that tastes great with charred effect, as well as foods that take little cooking time.

For those that prefer the traditional method we take a look at the best charcoal grills for 2016.

The Rolls Royce of charcoal grills, ask any aficionado, they’ll tell you to get a Weber, the original kettle barbecue. There’s so much to admire – the iconic design, the way the lid is sturdy on its hinges, the sheer amount of cooking space you have, which, in this case, heartily fed a good ten people. There’s a handy built-in thermometer, it’s easy it is to maintain and keep clean, and, as seems to be the rule with lidded barbecues, much of the cooking happens in secret, so there’s not too much poking at things with tongs to be done. Your job is to patiently wait while it works its magic.

This is the barbecue of choice among top chefs and it’s easy to see why. Based on an ancient Japanese ceramic Kamado oven, it looks great, and even this mini “portable” version is sturdy and weighty – you’d need a couple of people to position it into place. Once you’ve mastered the simple heating and cooling technique, using the air vents, you can blaze this up to unbelievable heats, and even use it as a pizza oven. Brilliant, but not cheap, especially in the bigger sizes.

You could imagine this being demonstrated to 007 in one of the earlier Bond films, because it looks precisely like a spy’s briefcase. But a deft lift of the lid, and ta-dah! You’ve got a grill big enough for a decent lunch for two. There’s a nice little tray for your charcoal, and space for a couple of steaks, although the downside is that you have to crouch down quite a lot during cooking. Great fun though.

In terms of how it looks and the sheer joy of barbecuing on it, this is the best of the lot. It’s a big oil drum sliced in half and turned into a grill, with nifty accessories like a thermometer and a little chimney coming out of the side. Made by professional blacksmiths, you can have these customized to suit your needs, which means they can be made to order (so you may need to wait two or three weeks for it to get to you). Perfect for big family celebrations.